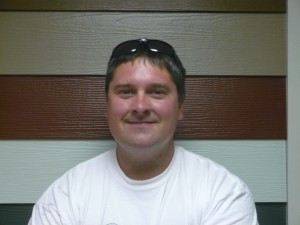 Darin Miller has been with our company for 5 years. He started as a siding installer, worked his way up to crew lead and then became a field supervisor. He was promoted this past April to Production Manager. His rise to Production Manager was quick and unexpected, and he has taken on the challenge and excelled way beyond our expectations.

We had quite a tumultuous beginning to our year. In March, our Production Coordinator, John, was deployed to Afghanistan. Darin Miller was brought in from the field to take over John’s position. We had one month notice for John’s deployment, and Darin spent this time training to take over for John. Darin was in his new job less than 4 weeks when we received a devastating blow to our team – our long term Production Manager, Nancy, was diagnosed with cancer and would need to undergo a stem cell transplant. Her doctor wanted to admit her to the hospital right then and there, but Nancy (in typical Nancy style) begged for 48 hours to get her affairs in order. Most of those two days were spent training Darin to take over the production department. Thus Darin, with less than 4 weeks experience in the office, was now heading up the production department with less than 48 hours of training. What used to be a department with two very capable full time employees was now down to just Darin and a part time college student, and we were entering the busiest time of the year!

We are happy to report that year to date we have achieved a gain in gross margin while decreasing our administrative production staff. Even more important than the financial results is Darin’s positive impact on others in our company. He’s calm – nothing flusters him, which keeps others calm. He’s nice – he never has a tone. He’s respectful. He’s never crabby. He’s a workhorse. He’s always positive. Certainly, Darin deserves to be considered for this award based on results alone. Add to that the fact that he took on an incredible challenge and comes to work every day with a wonderful attitude and willingness to do whatever it takes to help the company succeed. Darin Miller deserves to be honored with Rookie Production Manager of the Year.